Technology as a Tool for Creativity is adapted from my talk for Adobe’s Creative Cloud Events. This blog post is the second of the series on Amplifying Creativity that started with How I Started Business with Storytelling.

If one side of S1T2’s brain is story then the other’s technology.

The world definitely, doesn’t all feel the same way about tech as we do about story.

It tends to be treated with a religious mysticism, some worship tech faithfully, seeing it as an answer to solve all humanity’s problems but tech atheists avoid it, seeing it as the cause of all our problems.

As a creative, how does our work sit on this scale?

At S1T2, we try and foster an agnostic view of technology. To choose and use each one with creative purpose.

This mural, by the brilliant Artist Jo Ley’s proves that, it hangs over our heads every day. 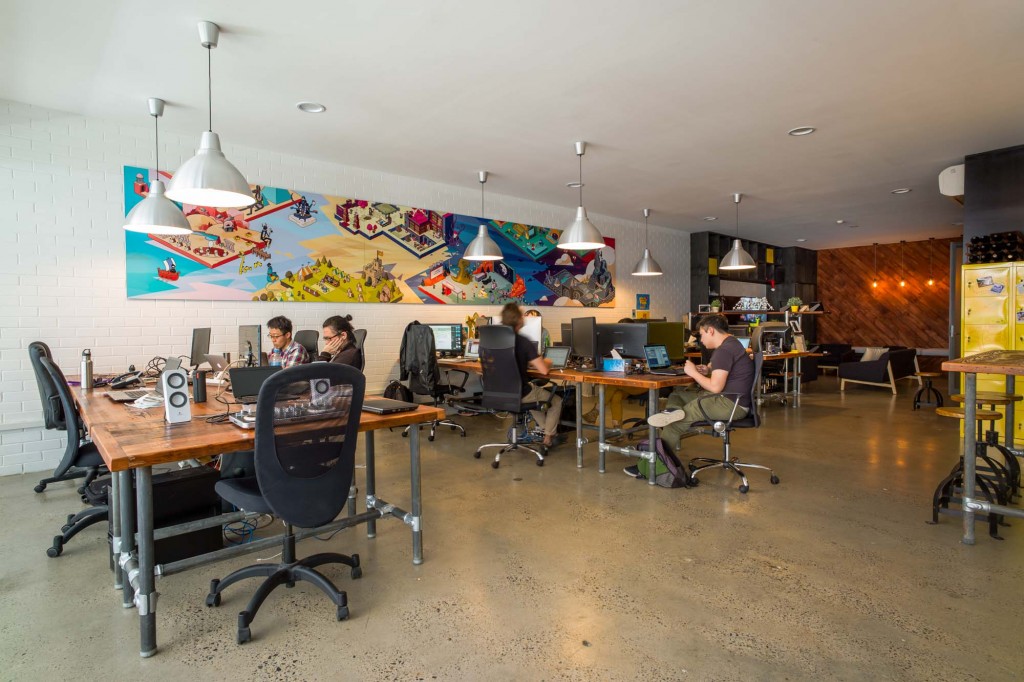 Each island represents a new era of technology, each technology inspiring a new era of storytelling. For the sceptics it’s reassuring to know we still use everyone of these; we haven’t truly left any island, but each island has enriched the stories of the last. From when caves paintings were the flatscreens of the world, to today, where we watch norse gods save New York.

Storytellers have always experimented and changed technologies to enrich how stories are told. Put them to work for their own purposes because that was their mission.

A character on this last island, can be found on every island. 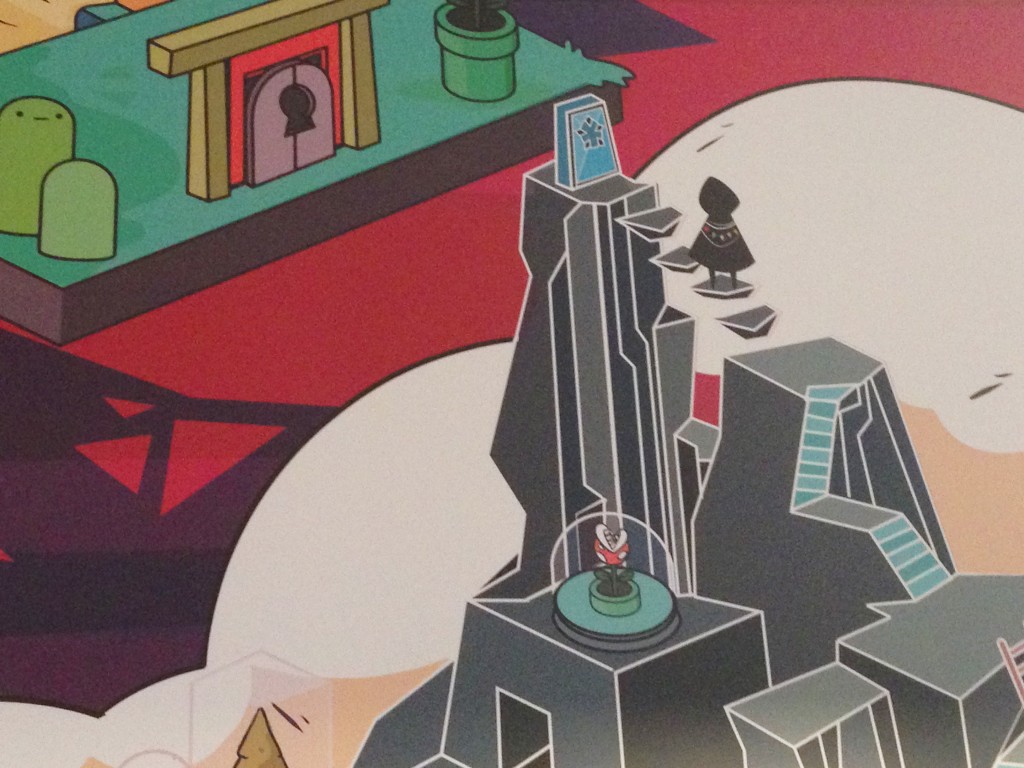 Our island can’t be built with the technology of the past, and we’ve never had so many options from which to build with. This calendar represents our journey on that mission. It’s all the technologies we’ve used on projects we’ve shipped. 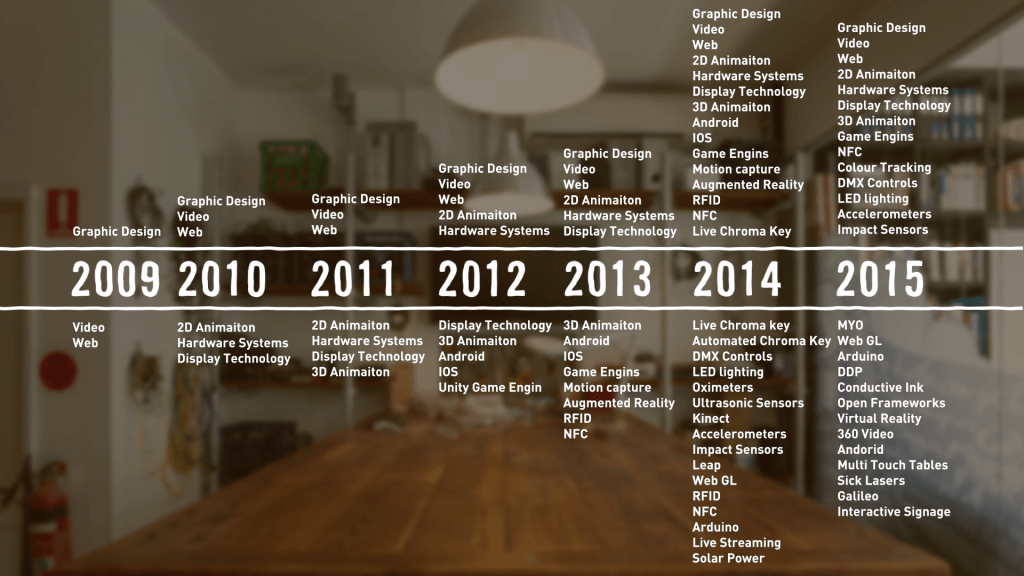 And it’s grown at an insane rate, as more technologies become available than we’ve had opportunities to try them.

As a creative all you need to do is ask:

This doesn’t mean re-inventing the wheel every assignment, it just means the same way you consider the next colour on your canvas, consider what your next canvas is made of.

If you do this enough, incrementally little by little over time you don’t need to worry about what new technologies will do to your future, because you’re creating it.

The Tale of Tibrogargan through new lenses

A project where we have tried to live up to this, is the Tale of Tibrogargan which was showcased at the Affector’s Mythology Exhibition.

It started when we were introduced by Matt Jackson to an amazing animator, ex-Disney James Brisco and told to go make something about myth.

Running straight to the mural, there were so many options, but to my own shame and disappointment there weren’t any Australian myths. But luckily James is British, and being British, he knew more about Australia than I and he went on telling me the tale of mountains becoming giants, and waves so high they cast the world in shadow.

What we both loved about the story wasn’t the nuanced subtitles of its subtext, but rather that it was about giants! So we asked how could we make this story big, feel big?

We’ll we tried our hand and heres a sneak peak at Tibrogargan the Virtual Reality tale.

Yes people, will want to try this because Virtual Reality is novel, but that’s not why we chose to use it or we’d choose it again.

There’s a point in the story where Tibrogargan’s son Coonowrin, is trying to save his pregnant mother from an oncoming Tsunami. As the wave gets so close, you think you could touch it, it’s when Coonowrin freaks out, ditches his mother and saves his own life.

Since the first time James told me the story I had no respect for Coonowrin as a character. But when we got an animatic together and I jumped in that virtual world, I was standing next to Coonowrin who at this staged looked like a potato beside this building size of a wave. I suddenly felt immense empathy for him.

VR’s ability to step hijack your senses and emotions is what can enrich the meaning of a story and makes it an empathy machine.

We can’t forget that a book is just as much a technology as your kindle, so we shouldn’t hesitate to use either if it helps you read more. The technology we’re born with, trained with, feels natural, but it’s still technology, we should be choosing it with creative purpose and exploring those uncomfortable and hidden places where creativity and opportunities hide.