In August 2015 at the heart of Sydney in Pitt Street Mall, we had the pleasure of launching HSBC’s Wallabies All Access, the first virtual reality experience in Australian sport. Working with hot and fresh technology meant we had to work out a lot of processes and kinks,  but it also gave us the exciting responsibility of giving audiences (most likely) their first taste of virtual reality.

This serves as a documentation of things we learnt in the process and a guideline for those looking to recreate a similar virtual reality experience.

Here’s a snapshot of the experience that we ended up with:

Research for this project started during preliminary concept stages to assert that the technology would match the creative we had in mind.

Adopting an agile process for this project meant creatives were storyboarding while consulting tech whizzes to receive instant feedback and recalibrate if needed. We found that this worked very well with the tight timelines and the nature of new technology.

We wanted to be able to provide the best experience that we could, which meant getting the best resolution, frame rates, and audio recordings that were achievable with the technology. We started off using the Samsung Gear VR with the Samsung Note 4, but superseded by the Samsung Galaxy S6 that offered higher resolutions. 2D 360 video was chosen over stereoscopic 3D due to time constraints and concerns that people would get nauseous. The specs we ended up with were 2D 360 video, 60fps, 4K resolution. 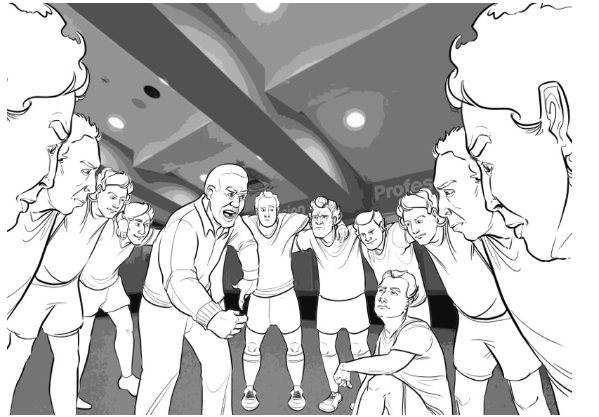 A storyboard for one of the scenes. 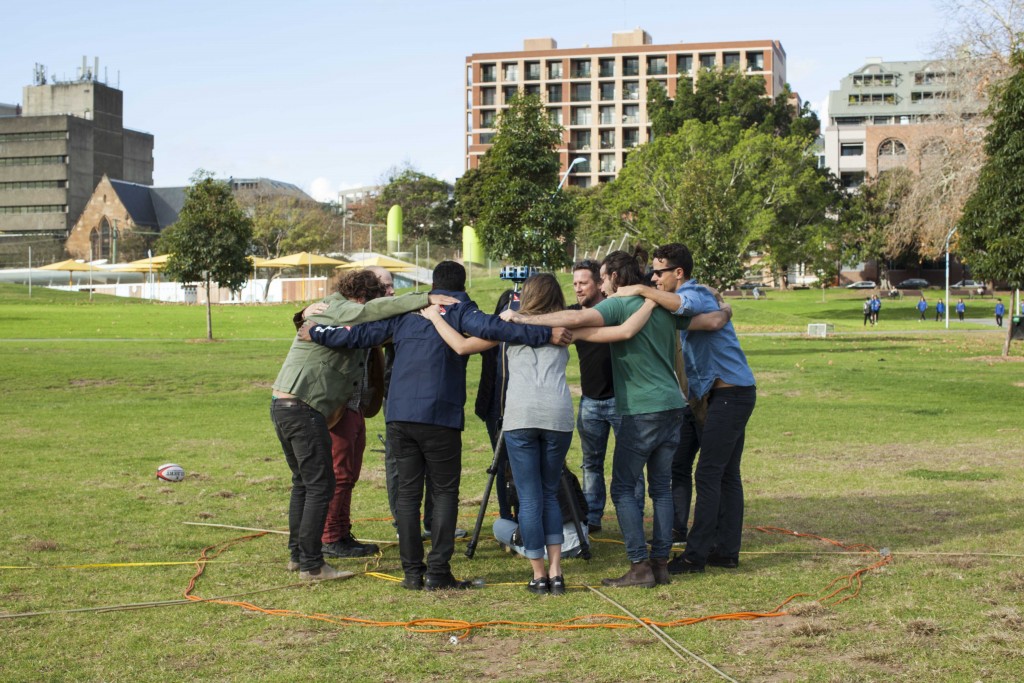 Shooting and testing the scene from storyboard above.

We did dry runs of crucial points of the story at the park, measuring out proper parameters of the scene to identify visibility and best practices for 360 video. Distance and positioning talent from the camera was a big factor to ensure visibility and clarity.

Here’s a still of the image above.

The director specified placement of talent with by placing markers in the scene, making sure that the talent’s face would never fall in the area where stitching would occur.

After the footage was stitched together, it revealed the problems of the experience. The lighting had of the scenes had to be equal,  different cameras would pick up different things that affected the stitching and post-production greatly. We also found particular actions work best with the footage. 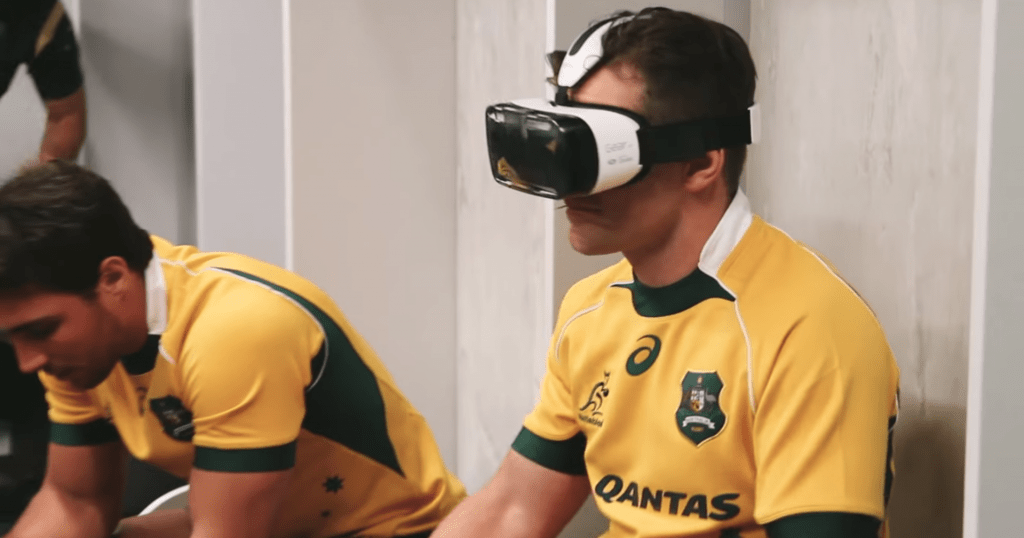 The talent (aka the Wallabies) try out virtual reality.

The talent involved were introduced to virtual reality, giving a better idea of the technology, make them more aware in the way they acted. The talents were celebrities in their own right, making our time with them limited, everything had to work as smoothly as possible.

Virtual reality is limiting in the sense that the final take needs to be perfect. If mistakes have been made, it has to be shot from the beginning. Lapel mics were used to record the audio, and markers were stuck on the floor to cue talent. 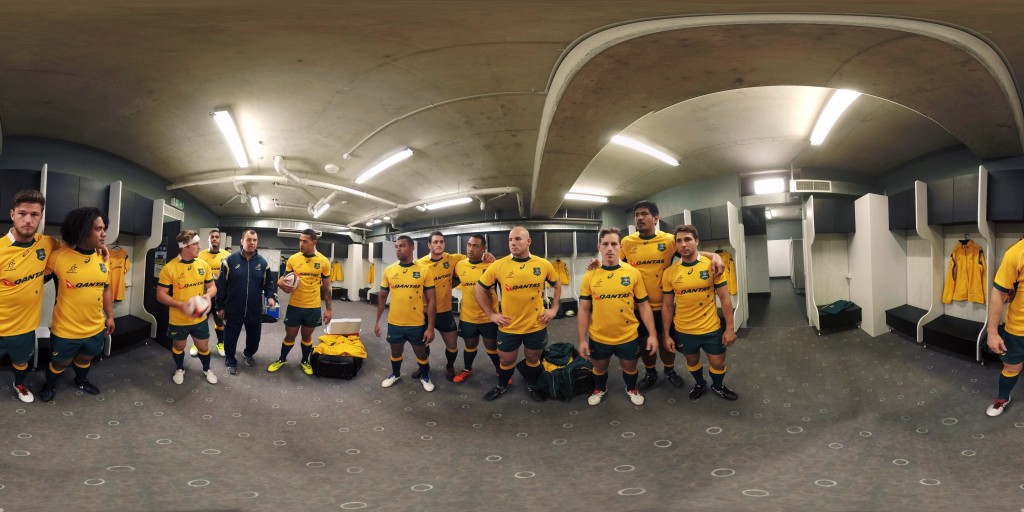 The Wallabies locker room as seen in 360°.

To ensure perfect lighting, we manipulated it until we got even lighting everywhere – this meant changing light bulbs in the locker room for the second scene. For the last scene, we only had one chance to make it right since a game can only have one opening, where the rig could be placed was limited and also making sure all the other enthusiastic cameramen wouldn’t bump into our rig too.

Arguably there’s a greater margin of error with virtual reality because it’s 360 coverage, and the audience’s perspective can’t necessarily be forced into just looking at a particular area.

Here’s a behind the scenes look at production:

To prompt people of the unique ongoing activation, a custom physical Wallabies locker room housed the #WallabiesAllAccess activation at the entrance of Westfield Pitt St. Mall. The activation was supported by brand ambassadors to help facilitate the experience for patrons. 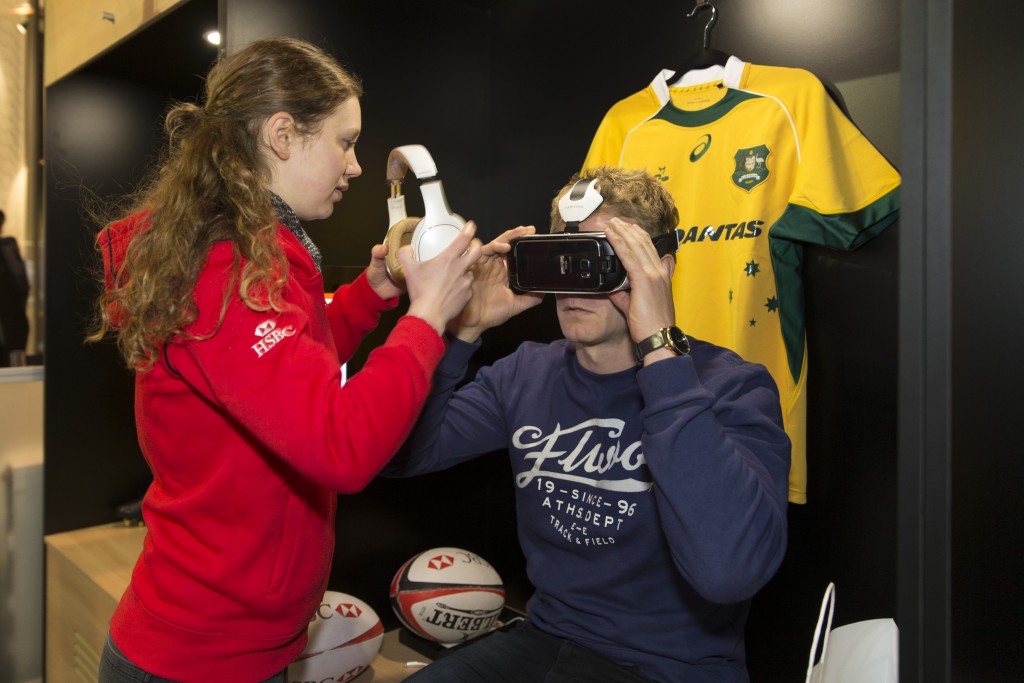 A participant experiences the HSBC Wallabies All Access experience.

As patrons waited in line, they were asked to enter their information on tablets then guided into their own locker cubicle. Carefully positioned cameras started recording the individual’s virtual reality experience documenting a unique piece of content amplifying the experience and the activation by sharing it with friends and family on social media. 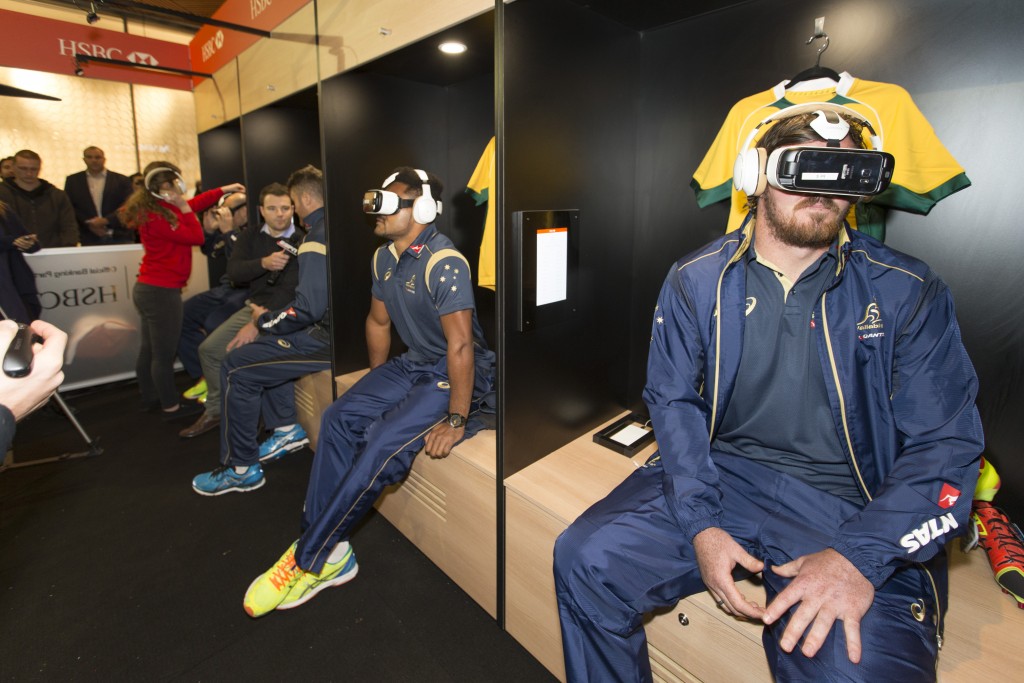 Since YouTube supports 360 video, we thought it would be great for you to experience it for yourself. Open your browser in full screen and navigate around the Wallabies experience with your mouse.

Being held at the busiest retail pedestrian precinct in Sydney, the activation made over 130,000 experiential impressions from foot traffic and an appearance from the Wallabies. More than 1130 experiences took place with four minutes of pure brand exposure.

#WallabiesAllAccess is a first in Australian sporting experiences featured on virtual reality.

Locker booths were continuously used and queued for during its eight hours of daily operation. Social media traction saw over 157,000 brand impressions and 35,000 actions online. 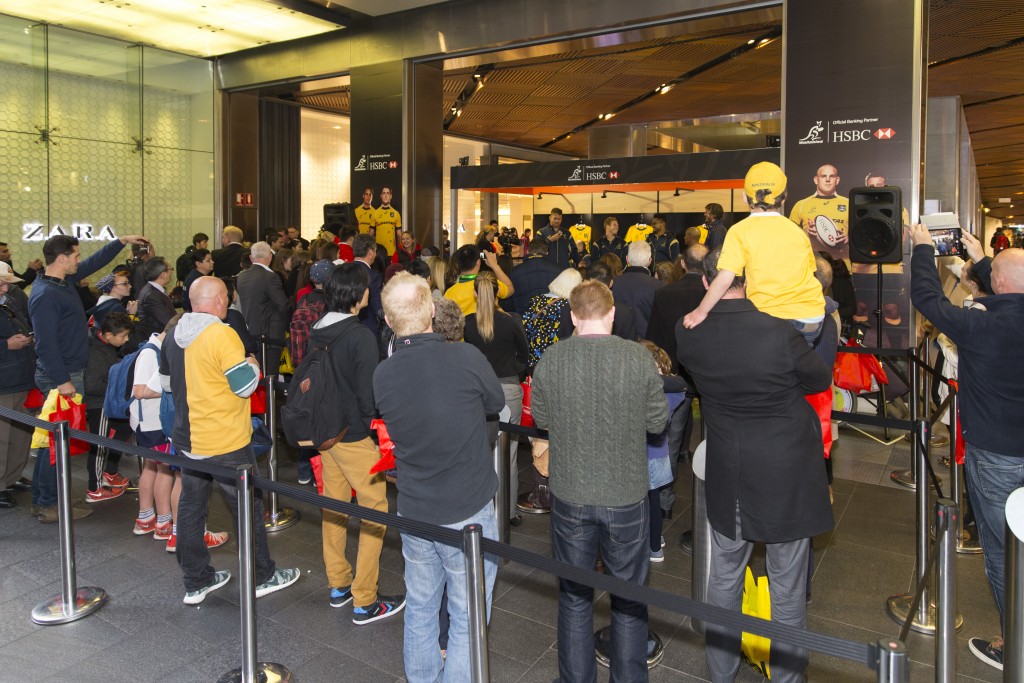 The activation was positioned in Sydney’s busiest pedestrian district.

As our first foray into the world of Live Action VR the technical pipeline was the biggest hurdle but the most rewarding learning came from the appreciation of what a first person perspective entails when there’s no clear 4th wall.

Virtual reality has a place for the future and we are not really sure where it will lead, but it is pretty clear that VR can take people where they could only dream of going. As a Wallabies fan, it was awesome to get an insight into team dynamics that came really clearly through the VR experience.

Sometimes in life, you get to work with on great projects with great people, this was one of them and I thoroughly enjoyed the experience with few and far between.

When you’re working on a project that involves such new technology, there usually aren’t any tutorials, guidelines, or documentations out there. To figure how to showcase the experience best, I had to talk to the team and collaborate as much as I can to develop a better virtual reality experience and in the process, also developing our own system and guidelines for future projects.

We hope this piece has given you a better idea and guideline of how you can execute a live-action virtual reality project. Subscribe to our blog if you enjoyed this blog post.