Online food delivery is big business. Even before the COVID-19 pandemic hit, Australians were making over 68 million food orders each year. That translates to roughly 7,000 orders every hour, or a whopping $756 million market. And these trends are only set to grow.

But when it comes to where we place those orders, the options are vast – and, at times, seemingly homogenous. In this crowded market, there’s a growing need for brands to differentiate themselves; to offer customers something more than tap-pay-eat.

That’s where our latest collaboration with Menulog comes in. 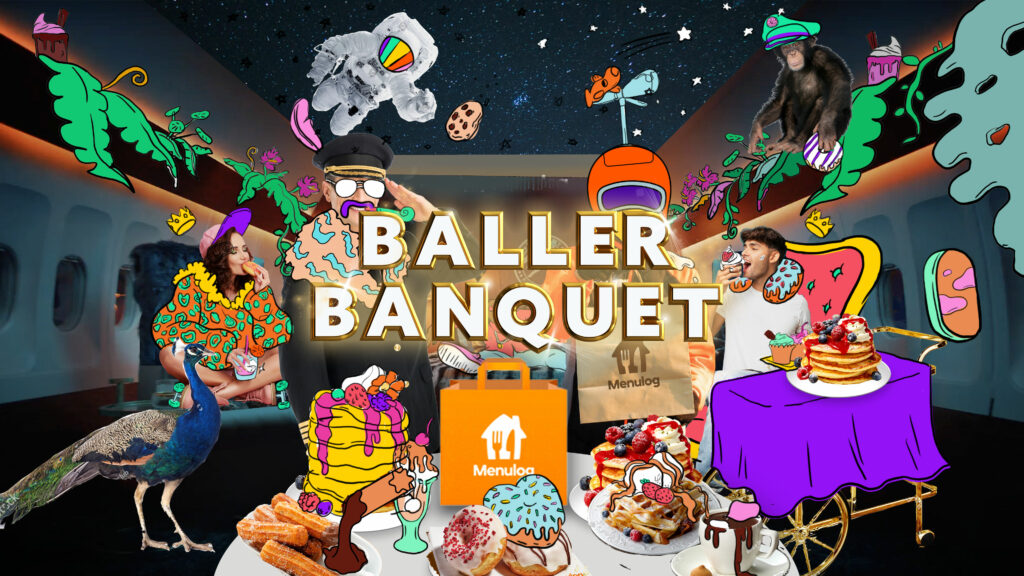 The Menulog Baller Banquet isn’t just about eating. It’s about making food fun. From pizza in your lounge room to living it up on a private jet, feast your way to bigger and better banquets – earning millions of discounts and rewards as you go.

We had a blast taking this campaign from cool idea to creative reality, and thought it might be fun to bring you behind the curtain to see what makes it tick. Read on and you’ll find out all about:

A different kind of loyalty program

The Menulog Baller Banquet started with a simple enough request: create a fun, interesting way to engage customers through an online loyalty program. But we quickly realised this was an opportunity to move beyond what you’d usually expect from these types of promotions – something that’s right up our alley.

A pizza party at home provides the humble beginnings of your Menulog Baller Banquet adventure.

The goal we set ourselves wasn’t just to reward customers for engaging with the brand, or even to bring new customers in. We wanted to incentivise different kinds of engagement; to give customers a reason to think of Menulog in situations they might not otherwise consider. And, of course, to have some fun in the process.

The beginnings of an idea

The Baller Banquet concept was designed in parallel with Menulog’s ongoing partnership with Snoop Dogg. In particular, we looked to a recently released TVC of the revamped Menulog jingle for inspiration. The commercial shows Snoop in a collection of unashamedly over-the-top scenes themed around food.

It was this idea – of real people in ridiculous situations – that became the base of our approach to the Baller Banquet. In our version, you become the hero of the scene. With each order, you’re able to level up your scene from pizza with a friend in your living room to a lavish palace banquet fit for the biggest ballers in town. As you progress, the scenes get more ridiculous and extravagant, allowing you to fulfil your ambitions of becoming the biggest baller in town. 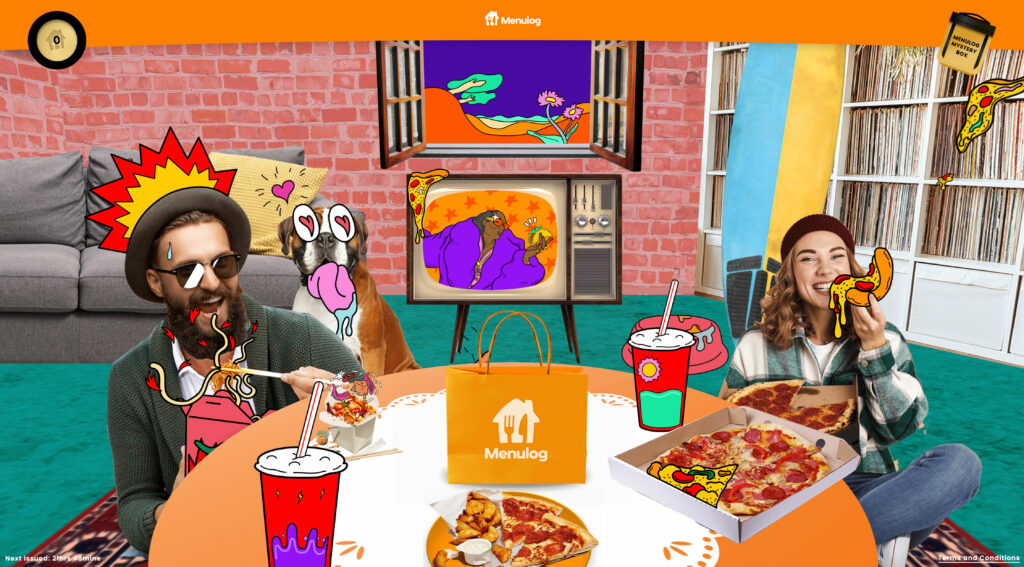 A pizza party at home provides the humble beginnings of your Menulog Baller Banquet adventure.

We captured the vibe of the Snoop TVC through an art direction we have fondly titled ‘bling bling realism’. Blending real life and fantasy, we mixed photographic scenes and extravagant illustrations to portray a dream world somewhere between real and ridiculous. From the very first scene, we use exaggeration to ignite the imagination of our audiences, tempting them to unleash their inner baller and build the banquet of their dreams.

Level up your banquet with online gamification

At its core, the Baller Banquet is about bringing fun and excitement to the Menulog ordering experience. Beyond bold art direction, we do this through gamification. Turning orders into challenges, we give customers the chance to feast their way to bigger and better banquets.

While the scenes are a visualisation of your progression through the experience, the real interactivity lies in the game mechanics. Drawing on tried-and-true conventions from mobile gaming, we use challenge cards and prize boxes to keep users excited about building their banquet as they order.

As you feast, you’ll level up your scene while earning points to trade for the real-world rewards of the  ‘mystery box’.

From ‘Order on the App’ to ‘Order Pizza’, it’s up to you to choose which challenges to take on and how many points you’ll earn as a result. Each challenge was conceptualised as an opportunity to not just reward engagement, but to drive new behaviour. For example, challenge cards such as ‘Order on Monday’ encourage customers to think of Menulog in situations they might not otherwise consider. 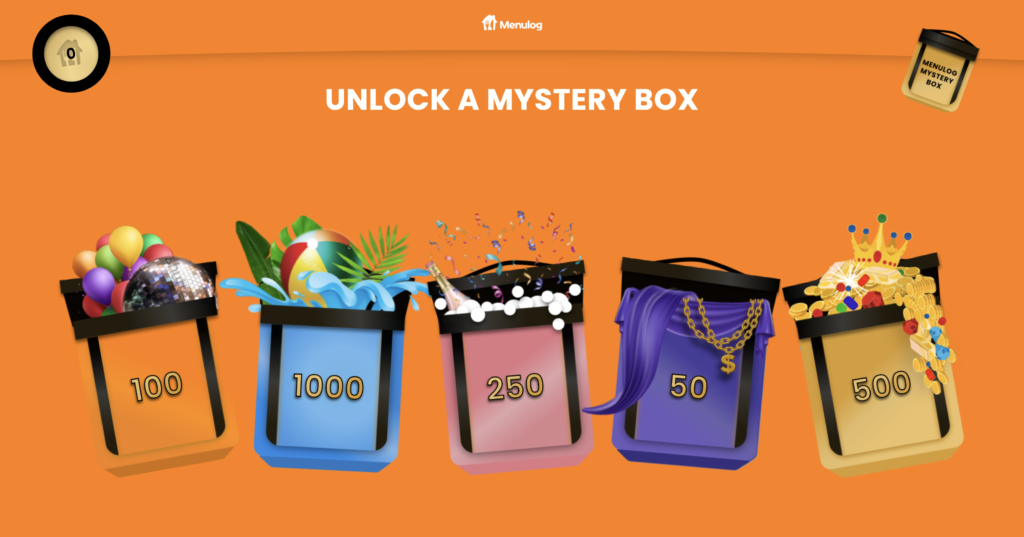 Our mystery boxes add an element of randomness and surprise that adds a level of suspense and anticipation that’s bound to pull you in.

A mashup of illustration and animation

At the end of the day, Menulog is selling real food to real people. We needed a way to capture the exaggerated baller lifestyle without drifting too far away from the reality of receiving a tasty meal at the end. That’s where illustration came in. After putting together our photo-montage scenes, we used fun, doodle-inspired illustrations to breathe life and energy into the scene. Suddenly, an ordinary pizza slice was transformed into a gooey, stretchy, cheesy bite of deliciousness.

The doodle-like illustrations bring a sense of fun and vibrancy to the photomontage scene.

But exaggerated illustrations weren’t quite enough. After all, this was about the biggest party in town. The next logical step was adding motion to bring the static scenes to life. This did present some technical concerns at first – more motion generally means a heavier website, both in terms of the burden on the visitor’s device to draw all the animations and the amount of data that needs to be downloaded.

To minimise the costs of animating and get the party loaded quicker, we created our animations in After Effects and exported using the Lottie plugin. SVG animations allowed us to pack the site with bursts of motion through small vector files that are quick to download, more performant, and often better looking than the video equivalent.

A sample of the many, many Lottie animations that give energy and life to each scene.

You might think that adding illustrations and animations to our photo-montage scenes would be enough. But this was about throwing the biggest party in town. So, when our web development team got involved, we took things to a whole new level.

With some creative thinking we expanded the party collages into 3D environments. Everything in the scene – the people, the food, the disco balls – is positioned in 3D space, creating the playful interaction of surveying your party from the head of the table.

We achieved this perspective through CSS 3D perspective and transforms. This approach leverages the naturally 2D nature of the web to create billboard style flat images that could be extended to full 3D objects such as the backgrounds and the table to enhance the eclectic visual style.

Panning interactions may seem like a simple addition, but it’s so often the small things that really sell an idea.

Typically we render 3D on the web using WebGL. While this gives us considerable power, it also means that anyone using text-to-speech or reading mode is going to see the canvas represented by a single text description without the interactive elements of the scene.

To get around this, we took advantage of native HTML and CSS implementation to foster a more accessible and usable approach. In the final site, all scene objects are images with accompanying descriptions, and interactive objects are normal html links, making them discoverable with the keyboard for increased usability and accessibility.

Fun for now and the future

The Baller Banquet is up now and running all through November and December 2020. But really, that’s just the beginning. The underlying platform and core art direction are designed to be reused and repurposed for other future campaigns.

At a time where the food ordering market is increasingly crowded by competing services, our goal with the Baller Banquet was to give Menulog an edge – one that benefits not just the company but its users as well.

This isn’t just an opportunity to increase engagement. It’s a chance to continue a conversation with consumers in a way that will reward them for their ongoing support for the Menulog brand. And it’s a moment of connection and collaboration between brand and customer, a personalised experience that draws you in and makes you want more.

Start building your banquet at the “For You” tab of your Menulog account and keep a look out for up and coming special releases – we can’t say exactly what yet!

Oh, and don’t forget to subscribe below for more updates and insights from the S1T2 team.