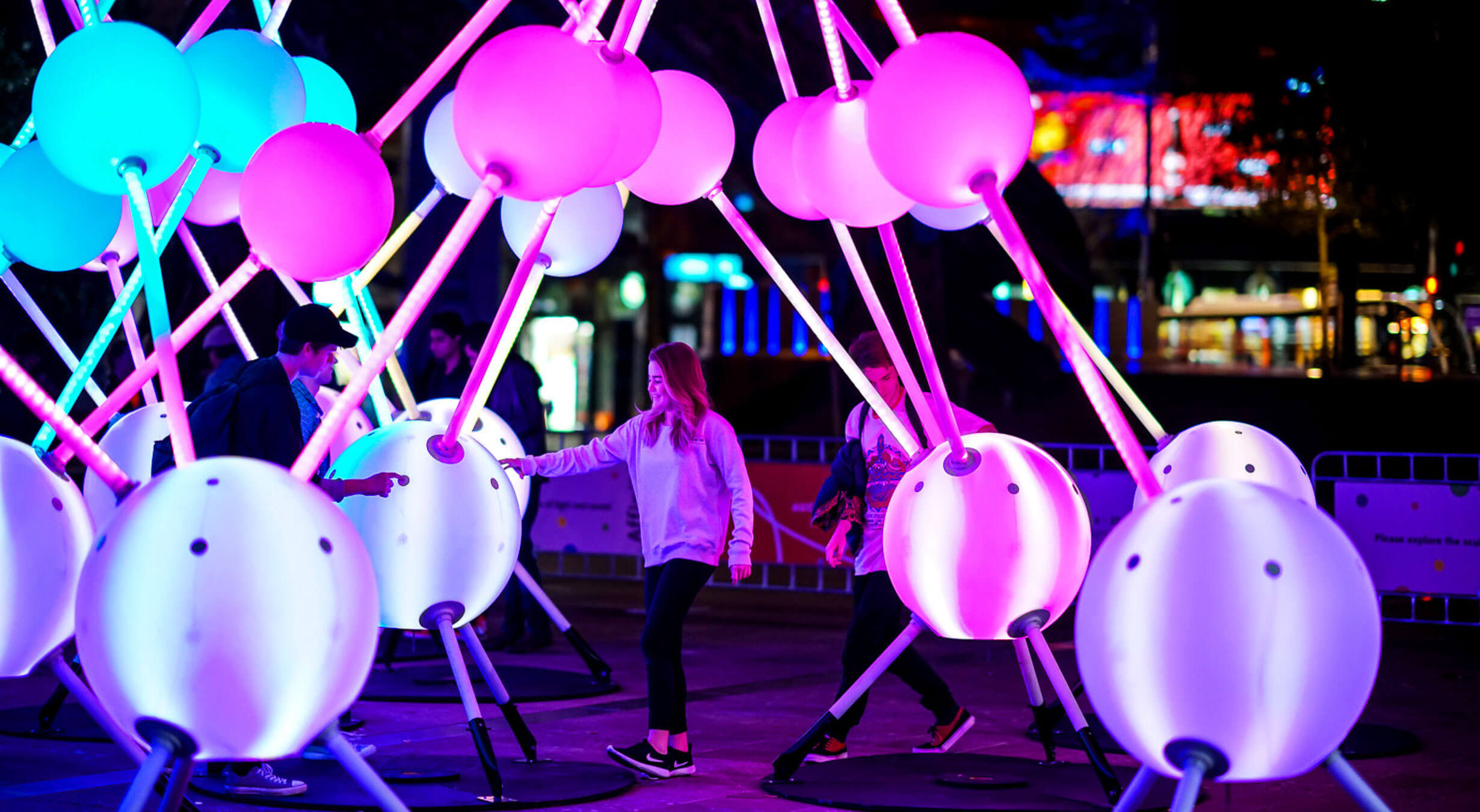 As part of the annual Vivid Sydney Festival, creative technologists at S1T2 designed and developed Affinity, an interactive sculpture that brings the mystery of memories to life. Created as a collaboration between creative technologist S1T2 and Amigo and Amigo, Affinity explores the effects Alzheimer’s disease has on the brain’s dazzling complexity and connectivity. With its concept and interactivity inspired by personal experiences from the S1T2 team, the sprawling light sculpture uses creative technology to demonstrate the importance of memories to who we are and the devastating impact of losing those memories through Alzheimer’s.

To experience Affinity, participants explored an intricate web of interconnected orbs representing neurons in the brain. Stimulated by touch, these interactive orbs triggered a striking display of sound and light that brought the sculpture to life. As audience members engaged with the orbs, their colour would spread across the entire sculpture. However, if audiences stopped interacting with Affinity, the Alzheimer’s colour purple would spread across the sculpture, using creative technology to represent the challenge of remembering when memories are no longer engaged with.

Affinity was the largest interactive experiential marketing sculpture at Vivid Sydney in 2015, visited by over 424,270 people for an average of eleven minutes throughout the festival, making it one of Vivid Sydney’s most popular interactive installations to date. Affinity has also garnered over 80,000 impressions on Facebook and more than 4,000 photos shared on Instagram

The sculpture has been publicly installed around the world including Vivid Sydney, Highlight Dementia Melbourne, Aotea Square New Zealand and National Gallery Singapore. It was also featured in various news and media publications such as Daily Telegraph, The Sydney Morning Herald, ABC News, Inside Out, ARN, NZ Herald Dementia Australia, Channel 9, Campaign Brief and B&T.

By visualising the disease as an artwork that could be interacted with and experienced, Affinity aimed to shed light on an otherwise difficult matter, raising awareness for foundations desperately in need of charity services in the fight against Alzheimer’s – thousands of Australians watch people they love and respect fade away in front of their eyes. Affinity sought to use creative and IoT technology to honour those lost memories, and encourage people to never give up making meaningful new ones.

With a 10 year lifespan, or 25,000 hours of operation, Affinity was designed to transcend a single use in order for it to be repurposed and experienced by people around the world. At the installation’s core is a modular system of neurons sturdy enough to withstand wind and rain, but flexible enough to allow for reprogramming and reappropriation for future applications. Though structurally resembling a landmark in size, the sixty balls, supporting legs, and network of creative technology can be reconfigured depending on the purpose and capacity of the exhibit location.

An Experience to Remember

Underneath Affinity’s colourful interactivity, the art installation also transitioned throughout the night from an angelic white canvas to an ominous deep purple. While the initial white colouring enabled a vivid, colourful display as audiences interact with the artwork, the slow creep towards purple became representative of Alzheimer’s destructive effects on the brain. Eventually, regardless of the audience’s efforts, the sculpture was overwhelmed by purple, erasing their interactions and memories in a powerful testament symbolic of the irreversible damage caused by Alzheimer’s disease.