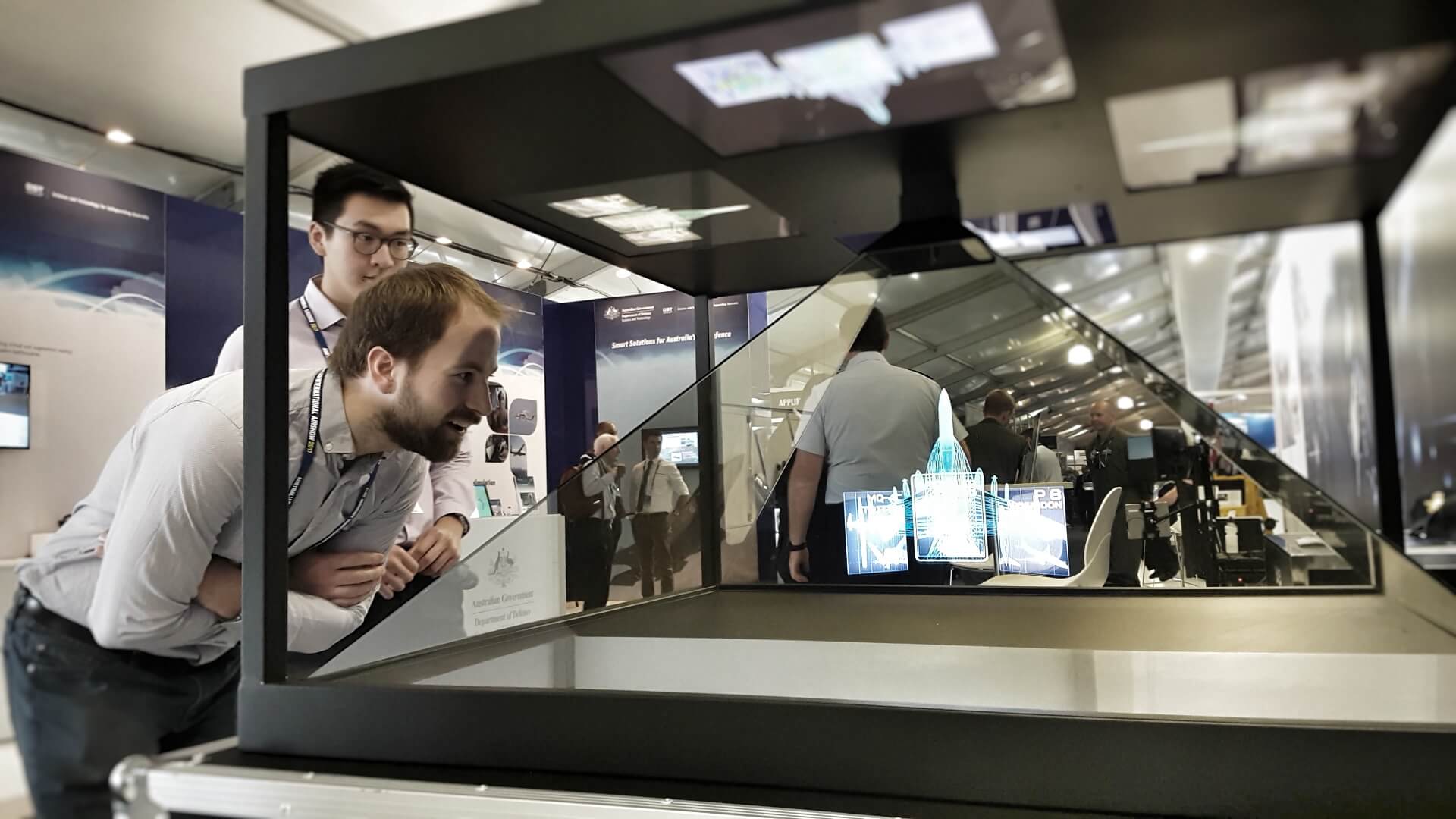 In an effort to enhance their displays at the Australian International Airshow, the Royal Australian Air Force and House of Kitch tasked creative technologists at S1T2 with creating a holographic video production that would showcase Plan Jericho’s role in bringing the Air Force into the information age. Standing as a representation of the Royal Australian Air Force’s commitment to embracing new insights and technologies through Plan Jericho, the hologram used creative technology to produce an engaging experience for visitors at the event and beyond.

The installation involved creating two instantiations of a one-minute hologram – one to be showcased on site during the event, and one that could be distributed to visitors for their own enjoyment. Both holograms, viewed through custom-built holographic projectors, were captivating experiences that visualised Plan Jericho’s mission to foster communication, collaboration and integration throughout the Air Force.

While the large holographic display formed a crucial part of Plan Jericho’s presence at the Airshow, the distribution of 500 smaller holographic projectors allowed visitors to download and view the hologram through their own smartphones even after the event’s conclusion. This smaller hologram used mobile technology to produce a more realistic view of the holographic video production. Unlike the larger display, which presented a single hero image on all sides, the smaller hologram presented a more realistic view by showcasing the true angles of projection, changing the image as it was viewed from different angles.

A 2D version of the holographic video can be viewed on S1T2’s YouTube channel. 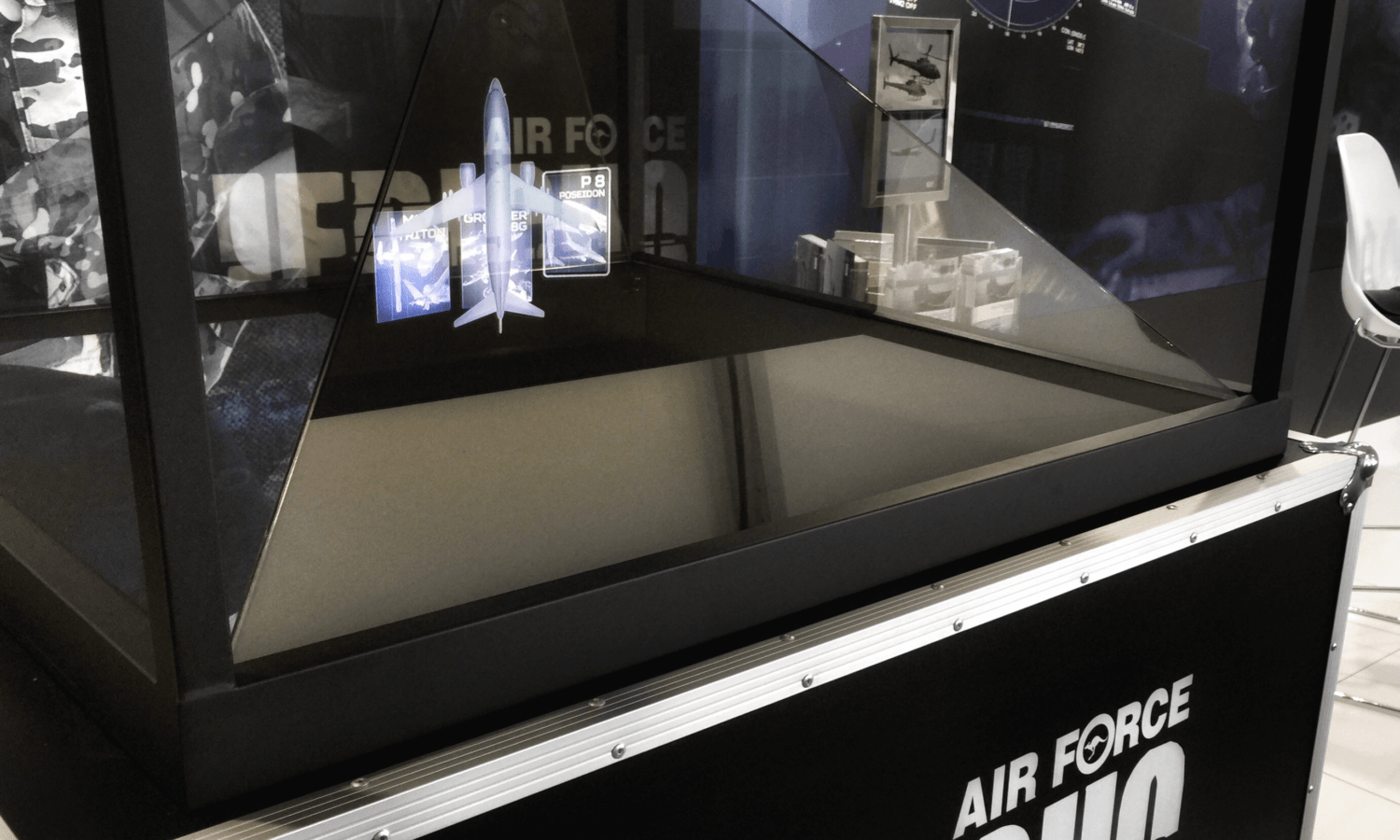 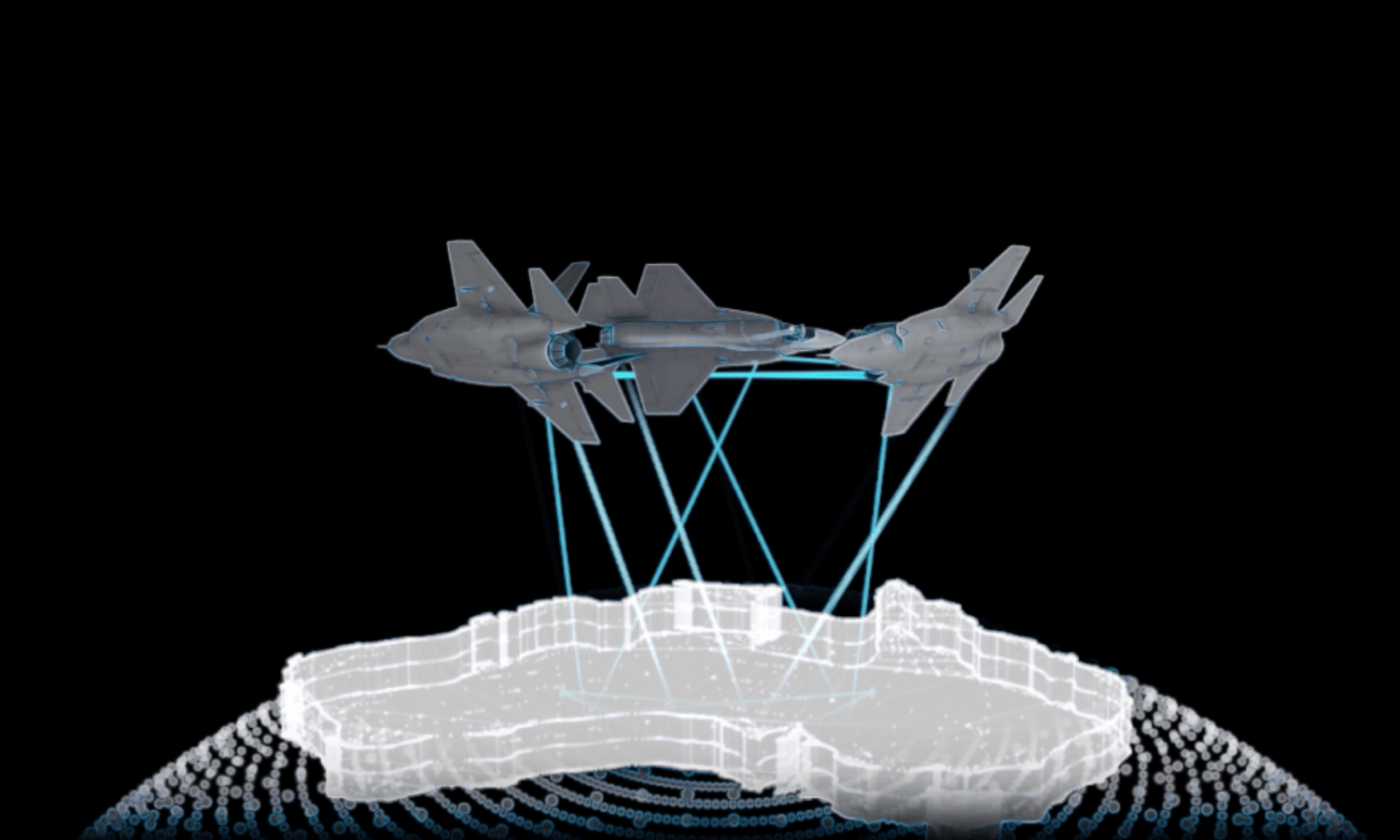 In order to bring the Plan Jericho hologram to life, we took advantage of the way pyramid projections could create a 3D optical impression of a hologram using a screen and glass reflections. This required sourcing custom-made holographic projectors that played images through a screen located above the pyramid structure, which then reflected any content at such an angle that when it came together in the centre of the projector it appeared as a holographic image.

Creating a realistic hologram, where the projection changed as it was viewed from different angles, involved developing the animation within a three-dimensional digital model of the holographic projector. By setting up cameras on all four sides, we were able to film – and later view – each different angle of a scene from the front, back, left and right. With each camera focusing on a different angle of a single animation, we could create a holographic video production that used creative technology to show three-dimensional content that behaved realistically based on the viewer’s relative perspective. 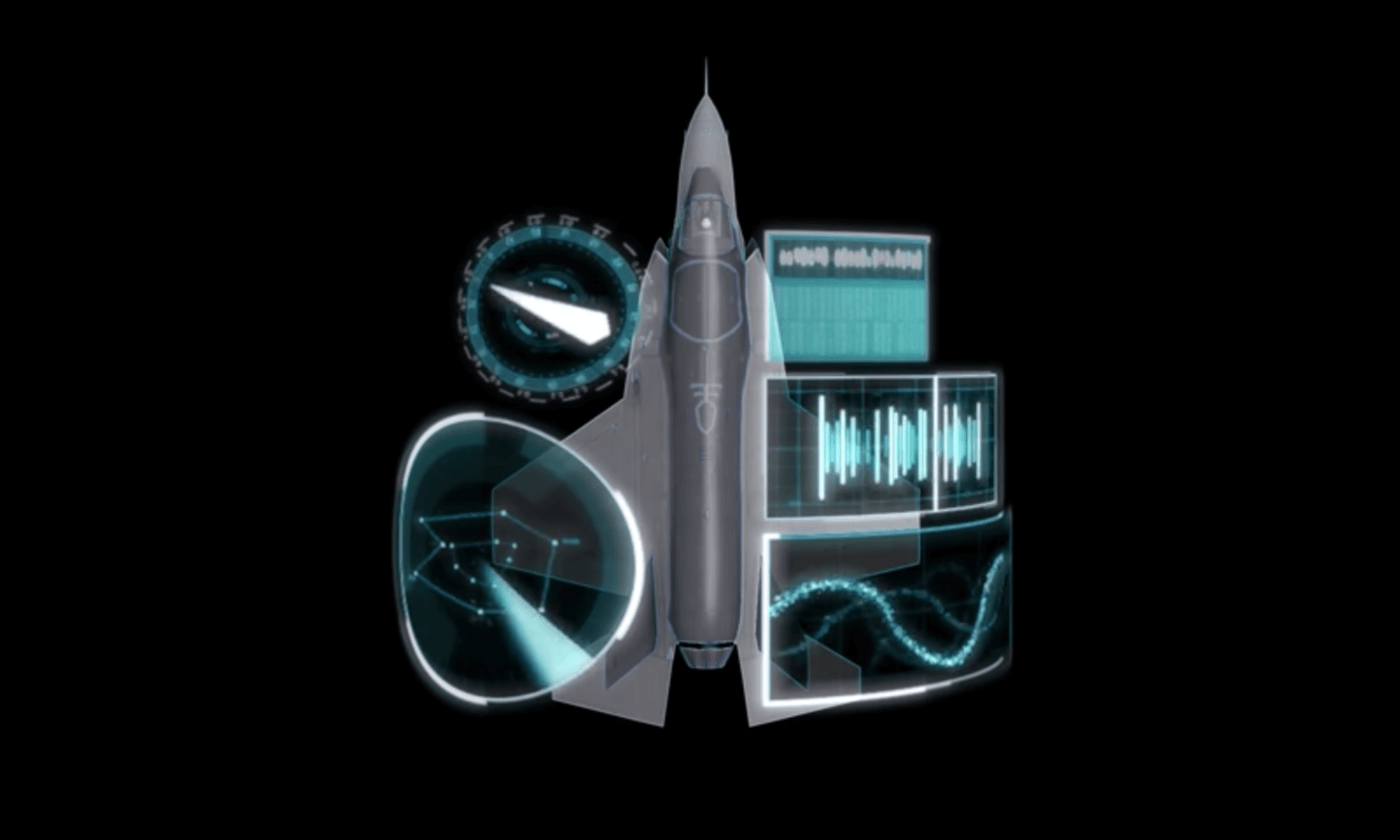 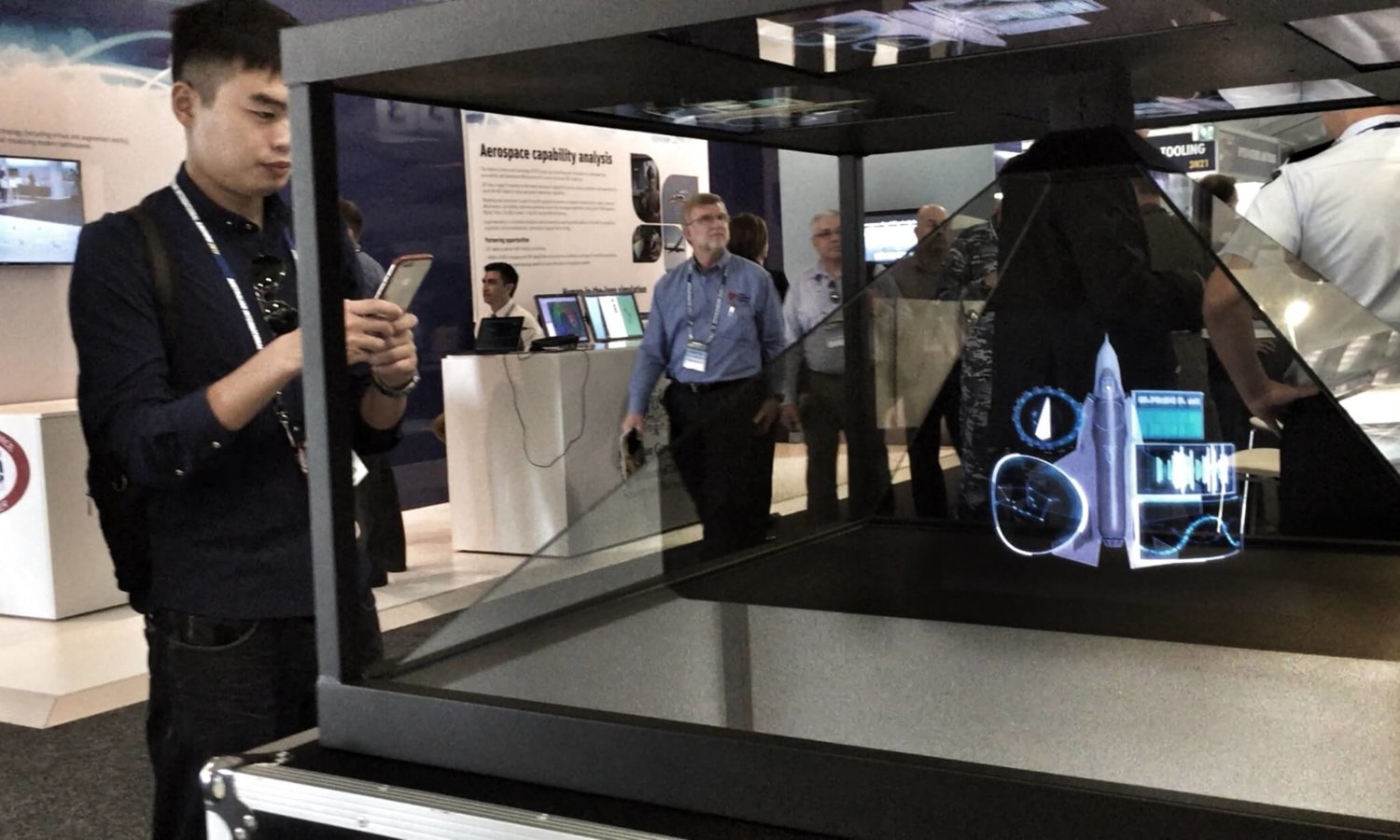 While this kind of video production setup could be constructed in any number of programs, the fact that each scene needed to be rendered four times – once for each camera – at high quality meant that the fast and realistic rendering of Cinema 4D software was particularly appropriate. This choice of tool also allowed the team to isolate animation layers from one another such that different shader effects (e.g. v-ray, cel, glow) could be applied to each, making the image displayed have more depth in appearance.